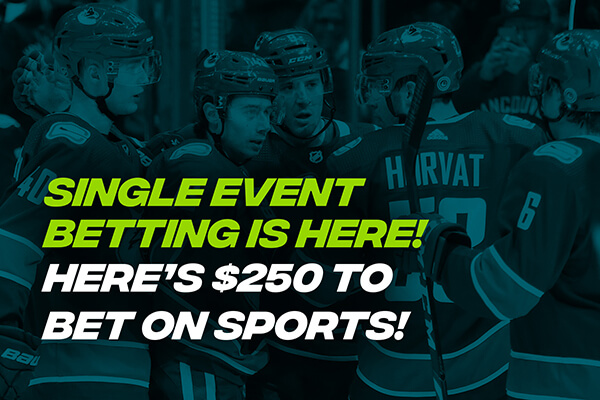 The Calgary Flames have experienced a significant turnaround this season, and PlayNow Sports players certainly have taken notice when it comes to betting on the Stanley Cup outright market.

A year ago, as the NHL made its way through the COVID-shortened 2020-21 campaign, the Flames found themselves on the outside of the playoff picture and facing questions about the future of its core group of players entering the offseason.

As of Friday, however, the Flames sit atop the Pacific Division with 106 points and a division title locked up with four games remaining on their regular season schedule. The turnaround has not gone unnoticed for those placing bets on which team will win the Stanley Cup this year.

The Flames currently sit with odds of 9.50 at PlayNow.com to win the Stanley Cup this season. Only the Colorado Avalanche and Florida Panthers have better odds. What’s more interesting is that about 10.1% of money wagered on the outright market is on Calgary to win it all, compared to 6.3% for Colorado and 7.4% for Florida.

Calgary’s move up the board now has them ahead of the Toronto Maple Leafs. Back on Feb. 18, Calgary’s odds of winning the Stanley Cup were 15.00, while the Maple Leafs have been hovering in the 13.00 – 10.00 range for well over a month.

The Flames, 8-1-1 in their last 10 games, have averaged 3.55 goals-for per game, which is sixth best in the league, while allowing just 2.47 goals-against per game. That average is the third lowest in the entire NHL. The company they are keeping within that category is noteworthy, as well.

The Carolina Hurricanes are tops in the NHL when it comes to goals-against per game, and they’re a Stanley Cup contender in the East. The Pittsburgh Penguins and Boston Bruins may also make some noise in the East before it’s said and done, and they’re among the leaders in goals-against, too. Same for the Colorado Avalanche, the current Stanley Cup favourite, and the Tampa Bay Lightning, the two-time defending champs.

Johnny Gaudreau has moved into third in the NHL with 109 points, and teammate Matthew Tkachuk has also recently hit the 100-point plateau for the season. While in net, the Flames are backstopped by veteran goalie Jacob Markstrom, who is rolling through another impressive season with a .922 save percentage.

The list of Canadian teams making the playoffs this season will be thin.

The Ottawa Senators, Montreal Canadiens and Winnipeg Jets have already been officially eliminated from post-season contention. The Vancouver Canucks playoff chances are in the single digits with four games remaining. Meanwhile, the Edmonton Oilers are likely to clinch a playoff spot and the Maple Leafs and Flames have already clinched.

But the Oilers have had their issues in net this season, and the Maple Leafs haven’t made it out of the first round in 18 years. Confidence in the Flames to lift the Stanley Cup in a few months certainly seems to be on the rise.

Overtime is exciting to watch but if your wagering behaviour has you constantly on the edge of your seat, it may be time to consider changes. If you gamble, use your GameSense. Must be 19+ to play.

If you're experiencing difficulties associated with gambling, our self-exclusion program, Game Break, may be a great way to help you take a break and regain control. Learn more.