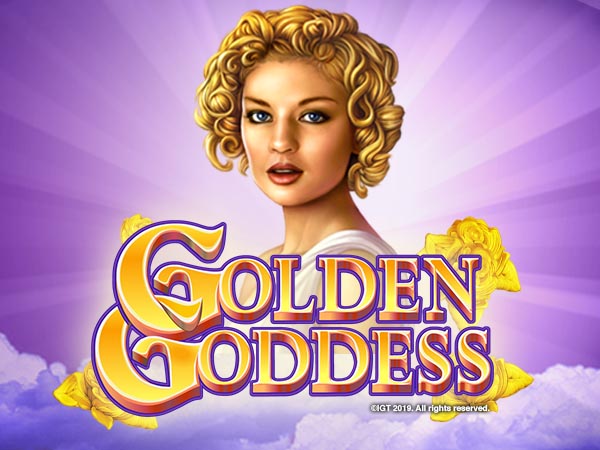 The online slot game that brings the mythology of Greece to life.

This online slot game brings the mythology of Greece to life, along with a wealth of bonus features and entertainment that include the epic Super Stacks! This exciting online slot game features an ornate, classical feel, with a backdrop of Grecian mountains and gardens, overlaid by the gold-adorned reels. It’s easy to imagine yourself in the land of philosophy, standing beside the goddess herself!

How to play Golden Goddess

Golden Goddess is a five-reel online slot game with three rows and 40 paylines. Gameplay is easy to understand, which makes Golden Goddess a favourite online slot game for players of all experience levels. The Golden Goddess herself features as one of the symbols on the reels, as does a Man, a Horse and a Dove. The Red Rose symbol acts as a bonus scatter. If you land one scatter symbol on reels two, three and four, this will trigger seven free spins. You’ll get to pick a rose to reveal one of the four main symbols, and the icon you unveil will act as the Super Stacks throughout the spins. The Super Stacks feature provides the opportunity to receive huge stacks of symbols for a chance to wins!

How to place a bet

Golden Goddess features 40 paylines. The Line Bet displays your current bet per line. You can press the (+) or (-) buttons to increase or decrease your bet per line. Simply press the Spin button to submit your bet and spin the reels.

The Auto Spin feature allows you to play this online slot game automatically for a given number of spins at the current line bet for the 40 paylines. After selecting your desired bet configuration, press the Auto Spin button and choose how many spins to play at the current bet settings. Auto Spin plays the specified number of spins until the Stop button is pressed, a bonus is triggered, or the balance is insufficient to spin again.

Golden Goddess online slot game features 40 paylines. All line win symbols must appear on a played line and on consecutive reels, beginning with the far left reel. Only the highest winner is paid on each payline. Line wins are multiplied by the line bet. Free spins are played at the same line bet and same number of lines as the triggering game. Coinciding wins on different paylines are added. During play in the base game, bonus symbols only appear in columns 2, 3, and 4. Regardless of the bet size, there is an award cap on any single transaction. See the paytable for details. A transaction includes the results of the Free Spins Bonus plus the outcome which launched the bonus. If the award cap is reached in the bonus, the bonus ends immediately even if there are any remaining free spins.

The expected payback for Golden Goddess online slot game reflects the theoretical return across a very large number of spins by numerous players over an extended period of time. For this game type, the long-term theoretically expected payback can potentially be from 93.50% to 96.00%. For the specific version of this game actually operating on PlayNow, the long-term theoretically expected payback is 94.91%. The results for any given player over a play session can vary widely from this long-term, expected average in either direction. The fewer the number of games played, the wider the normal variance of actual payback that may be experienced.

In the event of a discrepancy between the information on this page and the official game rules attached in the PDF, the latter shall prevail.