Relive the charm of the classic tale in this modernized twist of Little Red Riding Hood. Follow Miss Red and the Big Bad Wolf through the forest as the End2End feature transforms the reels for enhanced riches! Travel to Granny's house for a Free Spins Bonus with even more Big Bad Wins!

Displays the current number of coins being played. Betting is fixed at 1024 ways which costs 45 coins.

Press to spin the reels and submit your bet.

Auto Spin plays the game automatically for a given number of games at 1024 ways and the current coin value.

Select the desired coin value, press AUTO SPIN, and choose how many games to play at the current bet settings. Auto Spin plays the specified number of games until the STOP button is pressed, a bonus is triggered, or the balance is insufficient to spin again.

During the base game, the Little Red and Wolf symbols activate the End2End expanding symbols feature. Symbol expansions occur in the following order:

Wins are evaluated after all symbol transformations are complete.

End2End example: Wolf symbols expanding over a winning 3 Granny symbol combination, in the base game: 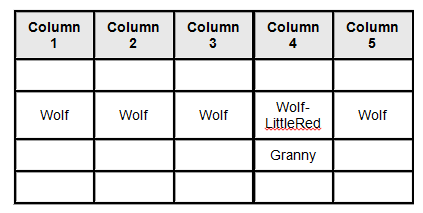 This following diagram shows a sample reel outcome using the LittleRed symbol. Because there is at least one LittleRed symbol in each of the first four columns, the player has won the 4 LittleRed MultiWay Xtra win which pays 15 coins per way. 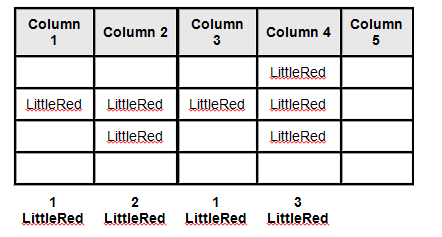 Granny's Free Spins Bonus is triggered by getting three Bonus scatter symbols anywhere on the centre three reels. These symbols are only found on reels 2, 3, and 4.

Choose the number of free spins by selecting one of five baskets displayed in the picker. Each basket reveals between 5 and 15 initial free spins.

The bonus has more plentiful End2End expansions than the base game.

During Granny's Free Spins Bonus, the bonus can be retriggered by getting three Bonus scatter symbols anywhere on the centre three reels. These symbols are found on reels 2, 3, and 4. Retriggering the bonus awards an additional basket selection from the picker for a number of free spins (between 5 and 15). The bonus can be retriggered multiple times, up to a maximum of 280 free spins per bonus.

MultiWay Xtra wins pay left to right, right to left, or in the centre three columns.

The expected payback reflects the theoretical return across a very large number of plays by numerous players over an extended period of time. For this game type, the long-term theoretically expected payback can potentially be from 92.00% to 96.16%. For the specific version of this game actually operating on PlayNow, the long-term theoretically expected payback is 94.98%. The results for any given player over a play session can vary widely from this long-term, expected average in either direction. The fewer the number of games played, the wider the normal variance of actual payback that may be experienced.