In a desperate mission to stop the Romulan ship, Narada, from destroying Earth, the Enterprise follows the Narada and hides undetected in Titan's magnetic field. Spock and Kirk secretly beam aboard the Narada to recover the red matter, a black hole creation device. As planned, Spock finds the red matter inside the Jellyfish, a captured Vulcan ship.

Spock commandeers the Jellyfish and blasts into warp with the Narada in hot pursuit. The ships drop out of warp, and the Jellyfish turns to collide with the Narada. The Narada fires missiles at Spock, even though the Jellyfish still has the red matter aboard. The Enterprise arrives suddenly and destroys the Romulan missiles in flight, allowing Spock to escape unharmed.

Scotty beams Kirk and Spock back to the Enterprise, right before the Jellyfish collides with the Narada and explodes. The explosion of the Jellyfish releases the entire stockpile of red matter, creating a black hole that swallows the >Narada.

The gravitational pull of the black hole tugs on the Enterprise, keeping it from escaping, even with its engines at warp speed. The pressure heavily damages the ship as Kirk orders Scotty to get them out of there at all costs. Scotty ejects the warp core and detonates it near the black hole, pushing the Enterprise to safety.

Take Control of the Weapons in the Enterprise Defender Bonus

Destroy Incoming Romulan Missiles and Spin a Wheel for Reward

Achieve Higher Scores for a Chance at Higher Awards

Experience Nine Unique Wheels with Awards Up to 22,500X

STAR TREK Against All Odds offers 720 ways to win for only 60 coins.

Displays the current number of ways being played. Betting is fixed at 720 ways which costs 60 coins and also enables the Energizing Wilds feature.

Auto Spin plays the game automatically for a given number of games at 720 ways and the current coin value. Once the desired coin value has been selected, press AUTO SPIN and choose how many games to play. Auto Spin plays the specified number of games until the STOP button is pressed, the Bonus is triggered, or the balance is insufficient to spin again. Auto Spin is only available in approved jurisdictions.

This following diagram shows a sample reel outcome, focusing only on the Spock symbol. Because there is at least one Spock symbol in each of the first four columns, the player has won the 4 Spock MultiWay Xtra award which pays 50 coins per way. To determine the payout for this combination, count the number of Spock symbols in each column. For example, the second column has 2 Wild symbols in it, and the third column has 3 Wild symbols in it. In both cases, Wild symbols substitute for the Spock symbol. Next, multiply those counts together to obtain the number of winning ways. In this example, that would be 1 x 2 x 3 x 1 = 6 winning ways. Finally, multiply the number of winning ways times the payout for the 4 Spock MultiWay Xtra award. In this example, that would be 6 x 50 = 300 coins won. The actual amount won in currency would be based on the coin value. 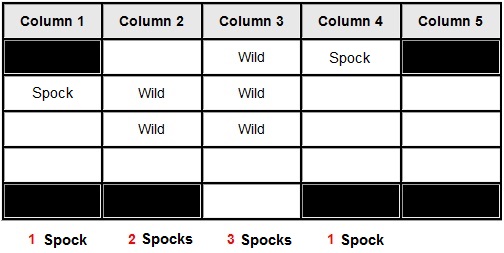 The Energizing Wilds Feature may trigger randomly after any reel spin with no visible Wild symbols and no triggering of the Enterprise Defender Bonus. When the Feature triggers, the Transporter Cursor appears and randomly turns two or more reel symbols Wild on the three middle reels, up to a maximum of five additional Wild symbols.

Wins paid based on the final reel state only.

Ready to defend the Enterprise and attain the rank of Captain?

Trigger the Enterprise Defender Bonus by getting five Bonus scatter symbols anywhere on the reels.


Based on earned rank, spin a random wheel for that rank. There are nine wheels total, three wheels per rank. Higher ranked wheels have higher top awards, but every wheel has the same average payback. Press SKIP TO WHEEL to skip the battle and spin a random wheel.


All awards in the Bonus multiplied by the Bonus triggering coin value.

Only the highest paying MultiWay Xtra™ wins for each symbol is paid per spin.

Only the highest scatter win award is paid. Scatter wins are multiplied by the total bet.

Regardless of the bet size, there is an award cap on any single transaction. See the paytable for details. A transaction includes the results of the Bonus plus the outcome which launched the Bonus.

No Federation vessels were disabled or destroyed in the making of this game.

In accordance with fair gaming practices required in most legal jurisdictions world-wide, each and every game outcome is completely independent. The odds of getting any particular outcome are always the same.

The expected payback reflects the theoretical return across a very large number of plays by numerous players over an extended period of time. For this game, the long-term theoretically expected payback is 95.00%. The results for any given player over a play session can vary widely from this long-term, expected average in either direction. The fewer the number of games played, the wider the normal variance of actual payback that may be experienced.

All trademarks are registered trademarks or pending trademarks of IGT and/or its licensors in the U.S. and/or other countries. © 2013 IGT. All rights reserved.