Your odyssey to epic riches begins. Enjoy unprecedented levels of slot action with 40 paylines plus 1024 additional ways to win! Bet 40 coins to activate 40 paylines; gain 1024 more ways to win for only 40 coins more. With twenty independent reels, you can reap monumental pays for big clusters of matching symbols.

Get two or more scatter Bonus symbols and storm the city of Troy in the Free Spins Bonus. Enjoy 10, 15, or 20 free spins on extra-rich bonus reels with the opportunity to retrigger the bonus multiple times.

May the gods of Olympus favour you with wealth and glory.

Treasures of Troy features 40 paylines plus 1024 Ways. Each payline costs one coin to play. You can activate 1024 Ways by betting 40 coins more. You may set the value of each coin using the controls. Your coin value multiplies payline and MultiWay wins (if 1024 Ways are activated).

Auto Spin plays the game automatically for a given number of games at the current number of lines and ways (if 1024 Ways is activated) at the current coin value. Once you have selected your desired number of lines, ways, and coin value, click AUTO SPIN and choose how many games you want to play. Auto Spin will keep playing the specified number of games until you click the STOP button, you trigger a Bonus, or your balance is insufficient to spin again. Auto Spin is only available in approved jurisdictions.

Example of a MultiWay payout:

This following diagram shows a sample reel outcome, focusing only on the Queen symbols. Since there is at least one Queen symbol in each of the first four columns, the player has won the 4 Queen MultiWay award which pays 10 coins per way. To determine the payout for this combination, count the number of Queen symbols in each column. For example, the second column has 3 Queens in it. Next, multiply those counts together which equals the number of winning ways. In this example, that would be 1 x 3 x 2 x 1 = 6 winning ways. Finally, multiply the number of winning ways times the payout for the 4 Queen MultiWay award. In this example, that would be 6 x 10 = 60 coins won. The actual amount won in currency would be based on the coin value. 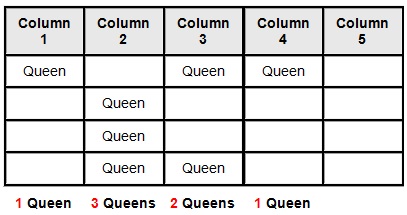 Your bet in the Free Spins Bonus, including 1024 Ways activation, is the same as on the reel spin that triggered the Bonus.

The Free Spin Bonus has richer reels and more ways to win than the main game.

All line pay symbols must appear on a played line and on consecutive reels, beginning with the far left reel.

Only highest winner paid on each payline. Line wins are multiplied by the coin value on the winning line.

Coinciding wins on different paylines are added. MultiWay wins (only available when 1024 Ways activated) are independent from payline awards and are also added to the total amount paid.

MultiWay wins are formed when the same symbol (or its substitute) appears on contiguous columns starting with the left-most column.

MultiWay wins are multiplied by the coin value.

Bonus scatter appears in column 3 only.

Regardless of your bet size, there is an award cap on any single transaction. See the paytable for details. A transaction includes the results of the Free Spins Bonus plus the outcome which launched the bonus. If the award cap is reached in the Bonus, the Bonus may end early before all free spins have been completed.

The expected payback reflects the theoretical return across a very large number of plays by numerous players over an extended period of time. For this game, the long-term theoretically expected payback is 95.03%. The results for any given player over a play session can vary widely from this long-term, expected average in either direction. The fewer the number of games played, the wider the normal variance of actual payback that may be experienced.

All trademarks are registered trademarks or pending trademarks of IGT and/or its licensors in the U.S. and/or other countries. Copyright © 2013 IGT. All rights reserved.