Chart your path to an amazing adventure of fortune in Nordic Heroes!

Play as Thora, a skilled elf archer, on a courageous quest. Defeat monsters in the Battle Bonus to level up and permanently increase your payback through the power of Level Up Plus. As you level up, unlock new weapons, a new hero and a new realm!

Gain up to a 20x multiplier in the base game Mystery Multiplier feature and keep spinning in the Battle Bonus until you defeat all monsters or your character is defeated. Collect all four achievements by defeating boss monsters.

Level up your hero and your gaming excitement with Nordic Heroes!

Displays the current bet per line shown in currency.

Press the left arrow (-) to decrease the bet per line.

Press the right arrow (+) to increase the bet per line.

Lines are fixed at 30 paylines.

Auto Spin plays the game automatically for a given number of spins at the current line bet and number of paylines selected.

After selecting the desired bet configuration, press AUTO SPIN, and choose how many spins to play at the current bet settings.

Auto Spin plays the specified number of spins until the STOP button is pressed, a bonus is triggered, or the balance is insufficient to spin again.

Your choice of character:

Both characters have virtually the same long-term expected payout.

Click on the compass to change your realm. This will bring up the realm picker screen. Click on the picture of your desired realm, or click OK to keep your current realm. The Sea of Glory is not available for picking until you have reached Level 5. Your choice of realm:

Both realms have virtually the same long-term expected payout.

Level Up Plus Feature

Permanently increase the payback of your game and unlock new game features with Level Up Plus. Collect XP (Experience Points) by defeating monsters in the Battle Bonus. When your total XP exceeds a given threshold, you level up. See the paytable for details. Your XP and current level are saved across play sessions. 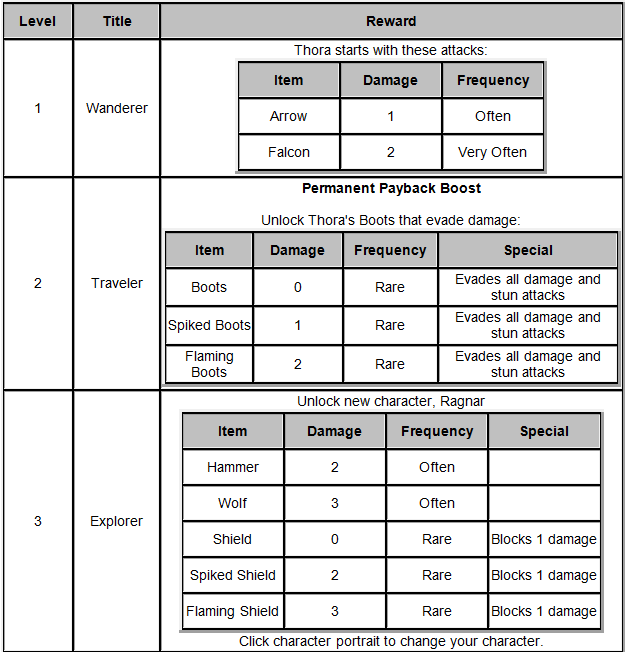 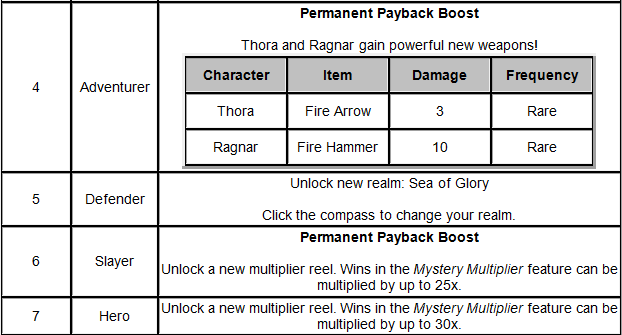 The Mystery Multiplier Feature can trigger after any base game win that does not also trigger the Battle Bonus. Outcomes are paid only after the Multiplier Reel resolves. The player's current level determines the set of possible multipliers.

The Battle Bonus is triggered by getting three Bonus scatter symbols anywhere on the reels. These symbols are only found on reels 1, 3, and 5.

Triggering the Battle Bonus lets you keep spinning as long as your character has health or until you have defeated all three monsters. After each free spin, battle reels spin for the character and current monster. Battle reel symbols do damage, protect against damage, or stun. See the paytable for details. Defeat three monsters to earn 1, 2, 5, or 10 Victory Spins. The number of Victory Spins depends on the character, the realm, and the number of spins it took to defeat the third monster.

Free spins are played at same line bet and same number of paylines as the triggering game. 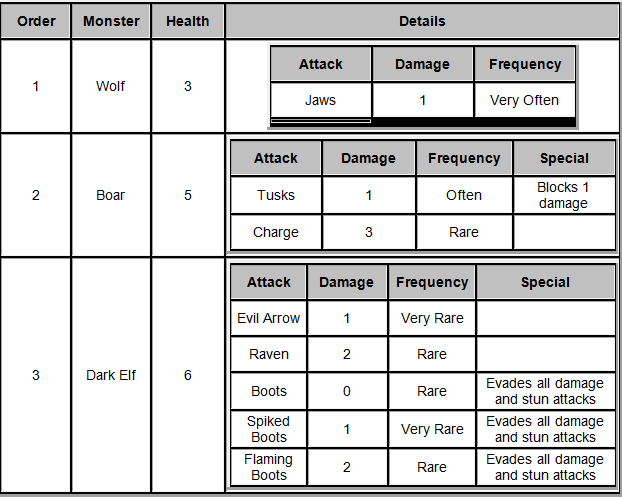 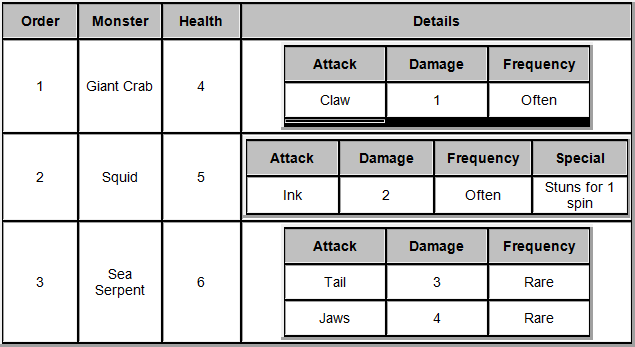 There are four achievements available in the game:

Adjust the quality of the graphics to get the optimal animation performance.

All line win symbols must appear on a played line and on consecutive reels, beginning with the far left reel.

Only the highest winner is paid on each payline. Line wins are multiplied by the line bet on the winning line. Coinciding line wins on different paylines are added.

Only the highest scatter win is paid per scatter symbol. Scatter wins are multiplied by the total bet.

Scatter wins are independent from line wins and are added to the total amount paid.

Changing devices during a bonus may affect your saved XP. This rare case may arise if you begin a bonus on a mobile or desktop device, then play for an extended time on a different device. If you return to the first device and try to finish the bonus, your total XP may revert to the original XP you had when the bonus first began.

In some jurisdictions, regardless of bet size, there is an award cap on any single transaction. See the paytable for details. A transaction includes the results of the Battle Bonus plus the outcome which launched the bonus. If the award cap is reached in the bonus, the bonus ends immediately, even if there are remaining free spins or the character still has health.

The expected payback reflects the theoretical return across a very large number of plays by numerous players over an extended period of time. For this game type, the long-term theoretically expected payback is from 93.0% to 96.3% depending on the total number of Level Up Plus levels unlocked. The results for any given player over a play session can vary widely from this long-term, expected average in either direction. The fewer the number of games played, the wider the normal variance of actual payback that may be experienced.

All trademarks are registered trademarks or pending trademarks of IGT in the U.S. and/or other countries. © 2016 IGT. All rights reserved.