For a limited time only, Daily Grand is bringing more chances to win $25,000 a Year for the rest of your Life.

You could win $1,000 dollars a day for the rest of your life…and with the September 16th and September 19th draws, you will have even more chances to win! 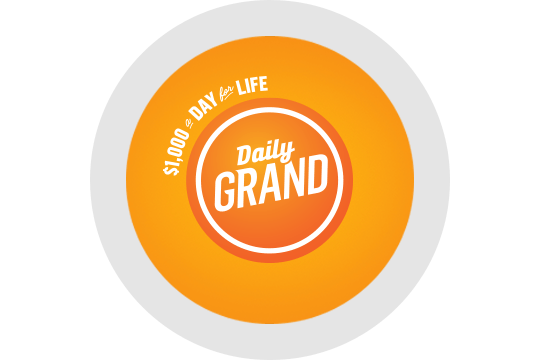 WHEN CAN I PURCHASE A TICKET FOR THE DAILY GRAND BONUS DRAWS?

HOW DO I MAKE SURE I’M ENTERED IN THE DAILY GRAND BONUS DRAWS?

Players who purchase a Daily Grand ticket for the Bonus Draws on September 16th and September 19th will automatically have a chance to win the jackpot plus the 5 additional prizes!

IS THERE AN EXTRA COST TO PLAY THE DAILY GRAND BONUS DRAWS?

The Bonus Draws offers more chances to win for the same price. Players who purchase Daily Grand play for the September 16th and September 19th, 2019 Bonus Draws will automatically have a chance to win the jackpot plus any of the Bonus Draw Prizes.

WHAT ARE THE ODDS OF WINNING ONE OF THE ADDITIONAL BONUS DRAW PRIZES?

CAN A PLAYER OPT OUT OF THE BONUS DRAW PRIZES?

No - if a player purchases a Daily Grand ticket for September 16th and September 19th draw, their ticket is automatically entered to win any Bonus Draws. There is no way to purchase a ticket that does not include the Bonus Draws.

CAN THERE BE TWO TICKETS WITH THE SAME BONUS DRAW SELECTION?

Yes, it is possible that another winner may win with the same combination of five main numbers. In that case, a lump sum prize would be split between the winners.

HOW LONG DO DAILY GRAND WINNERS HAVE TO CLAIM THE PRIZE?

Like all prizes won on Daily Grand, a prize won on any Prize Draw can be claimed for up to one year from the draw date. After that time, a prize is expired and cannot be claimed.

This promotion is open to residents of BC and MB who are of legal age to gamble.

DISCLAIMER: In the event of a discrepancy between the posted conditions on this site and the official conditions, the latter shall prevail.